College students officially became adults when they turned 18. But is there still a lot of kid in there?

Today’s campus egg hunt, masterminded by Longwood’s police department, left no doubt about the answer to that question.

Students crowded onto Brock Commons just before noon, soaking up the sun and waiting impatiently for the starting signal. More than 500 eggs were “hidden” in the grass, shrubs and flower beds, most of them filled with candy and a few with slips of paper noting a prize.

When it was “go” time, squeals and cheers rose up from the crowd as students scooped up eggs and cracked them open. One lucky student found the golden egg, which entitled her to a crisp $100 bill.

Another 500 or so eggs were given out to students by officers.

“I haven’t gone to an egg hunt since I was a kid,” said one student, her face lit up with anticipation and a smile. 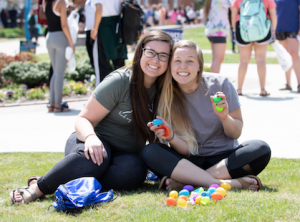 LUPD Chief Bob Beach said the goal for the event was to build community between students and the police department.

“We heard the voice of the students that they want a closer relationship with LUPD. We have worked hard on that in the past, but we need to do more,” he said.

When weather and staffing permit, officers head to Brock Commons in the afternoon to meet and talk to students, Beach added. Beach also regularly gathers with students for coffee and conversation.

For the egg hunt, candy-filled eggs were donated by Wal-Mart. Athletics, the Barnes & Noble Longwood Bookstore and others donated prizes. Seniors at the event could also register to win a full set of regalia for commencement and a diploma frame.