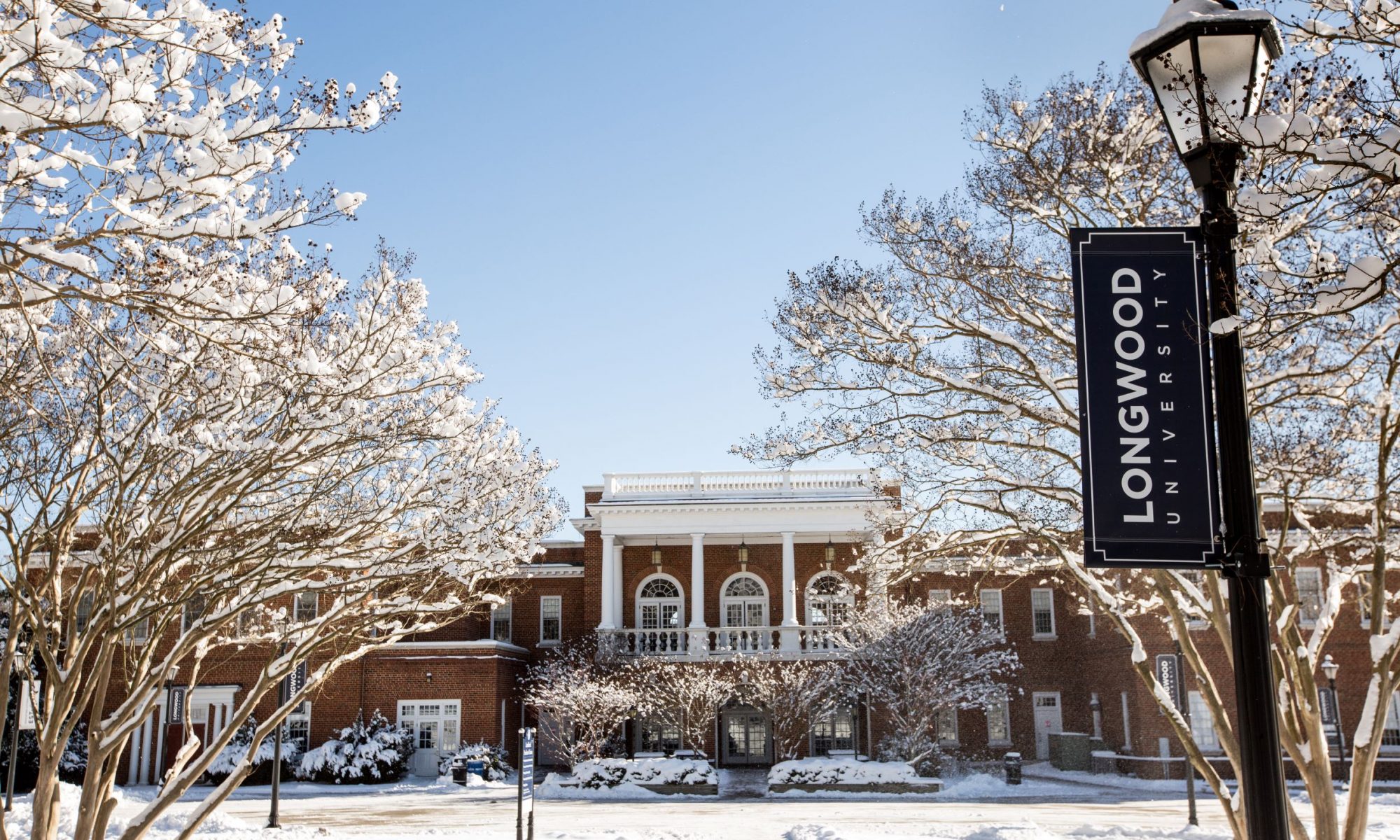 Longwood is officially closed for winter break. Offices will reopen on Thursday, Jan. 2. The first day of spring semester classes for undergraduates is Tuesday, Jan. 14.

I hope your holidays have been filled with love, laughter, good food, family, rest and relaxation—maybe with a little snow thrown in for good measure.

Thank you for entrusting Longwood with the education of your student. We take that responsibility very seriously, and we look forward to helping your Lancer continue that journey with the start of the spring semester. 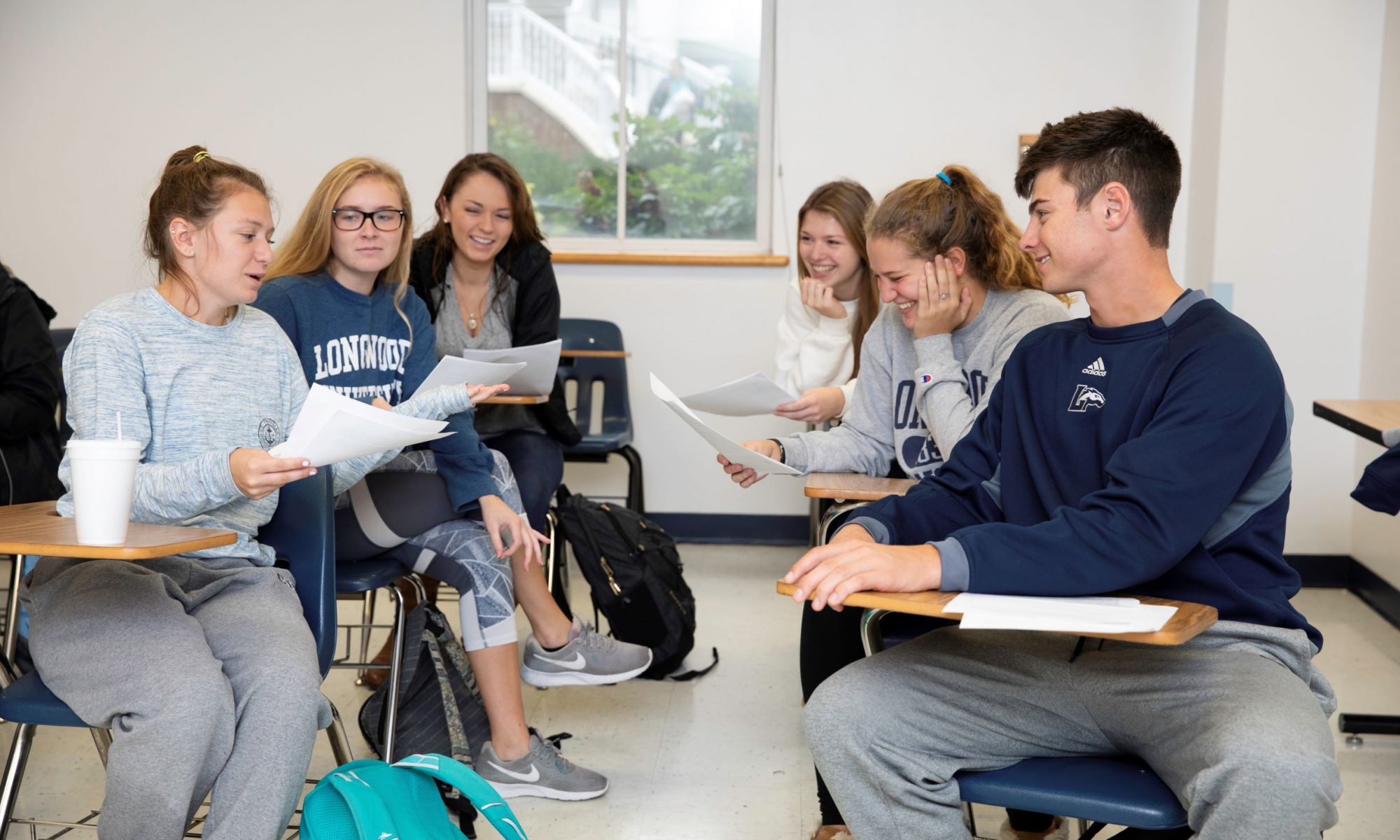 Longwood received three great pieces of news recently that are a testament to the growing stature of our university. If you’re out visiting family and friends over the holidays and there’s a lull in the conversation, consider using one of these points of Longwood pride to fill the gap!

The Short and Sweet Version…

Dr. Amorette Barber, associate professor of biology and director of the Office of Student Research, received an Outstanding Faculty Award from the State Council of Higher Education for Virginia recognizing her impact both in and out of the classroom. Only 12 of these awards are given each year, with more than 100 faculty usually nominated for the honor.

The prestigious Teagle Foundation, known in philanthropic circles for its commitment to strengthening the liberal arts at the college level, awarded Longwood a major grant ($100,000) to support implementation of the university’s new Civitae core curriculum. Other institutions receiving grants this year include Yale, Brandeis, Columbia and NYU–so Longwood is in very good company.

Longwood University’s Police Department was again ranked among the top 20 in the nation by Security Magazine. The department has been ranked in the top 20 eight times in the last 10 years and this year is the top-ranked police department among Virginia colleges and universities.

It’s hard to imagine anyone more qualified for an Outstanding Faculty Award than Dr. Amorette Barber, who joined the Longwood faculty in 2011. Barber balances her research with a heavy teaching load and her responsibilities as director of the Office of Student Research. She is known as an engaging teacher who challenges her students while keeping the classroom environment lively and captivating.

Barber’s work in her research lab has broken new ground—in 2018, she earned a patent for developing an immunotherapy treatment for numerous cancers. That came as she has mentored dozens of students who have gone on to medical school and some of the top graduate programs in the country, including Dartmouth and the University of Chicago.

President W. Taylor Reveley IV said the $100,000 grant from the New York-based Teagle Foundation should “serve as a powerful reminder that what we’re doing here is truly distinctive, noble, important for the country, and a model for others to follow.”

Specifically what Longwood has done is develop an innovative core curriculum, named Civitae (pronounced SIV-i-tay), that is designed to prepare students for 21st-century careers while developing them as citizen leaders equipped to serve their own communities.

Unlike many general education programs, Civitae courses are taken throughout a Longwood student’s four-year tenure. Longwood launched Civitae in fall 2018, so current freshmen and sophomores are the first to take these classes.

Civitae builds from exploratory Foundation classes in rhetoric, citizenship and different liberal arts and sciences disciplines to Perspectives classes that form connections between areas of study to broaden horizons and foster scholarly inquiry. Civitae culminates in a Symposium for the Common Good, an intense, semesterlong study of the campuswide theme E Pluribus Unum (Out of Many, One), taught from a variety of disciplinary perspectives.

The Teagle grant will fund a program to help Longwood faculty across a range of disciplines to develop Symposium courses for the new curriculum, bringing in recognized scholars and making use of founding texts of American democracy.

We know campus safety is a top priority for you and your student, and that’s why Longwood invests in a top-notch police department that has drawn national recognition.

“The Longwood University Police Department is a real point of pride for the university, and we hear from parents and students each day that they have a lot of confidence in the safety of our campus,” said Dr. Tim Pierson, vice president for student affairs, who oversees the department. “In the last 10 years, we have nearly doubled the security budget on campus, including growing our law enforcement staff to more than double the national average for a population our size.”

The police department has adopted community-policing practices focused on building connections with the community and utilizing proactive, student-focused crime-prevention strategies that include free security-focused training and making police officers available to students in nonenforcement capacities. 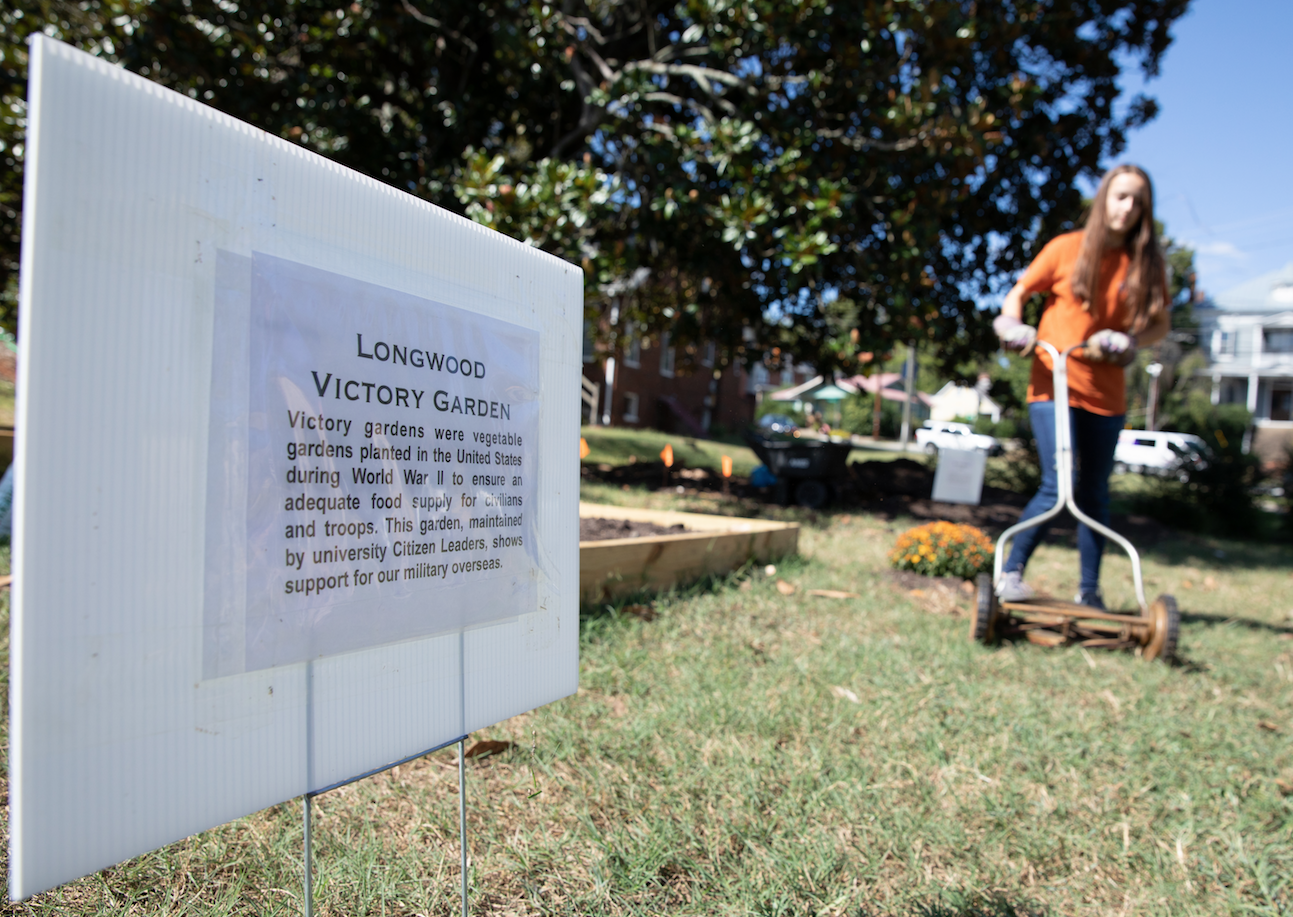 You see it on our street banners. You hear our students talking about it. It’s a part of Longwood from one end to the other. What is it?

Citizen leadership—which is the idea that everyone can be a leader in whatever circumstances they find themselves. In other words, you don’t have to be a CEO or a senator or a school principal to have a positive impact in your corner of the world. We instill this belief in your Lancers in numerous ways, but I want to share one example with you today that has a little bit of a twist.

It’s an English class titled 9/11: Loss and Redemption, where—along with writing assignments—students this semester planted, tended and then harvested a “victory garden.” You may have heard of these gardens, which helped supplement the nation’s food supply during World Wars I and II, but the purpose of the garden at Longwood is philosophical as well as practical.

Dr. Michael Lund, a professor emeritus of English who teaches the class, and his students have taken three loads of vegetables to Farmville’s FACES food pantry this semester. But even more important, working in the garden serves as a way to help the students connect to a time when Americans were more personally invested in the military, and attitudes toward service and citizenship were different, Lund said.

The class is part of Longwood’s new core curriculum, Civitae (pronounced siv-i-tay), which has a strong focus on creating citizen leaders. (Click on this link for more about Civitae and an explanation of the name and its Latin roots).

“I certainly connect [the class] to the idea of citizen leadership,” said Lund. “I thought I could put in place something that is a gesture to the veteran community and also educates my students about civilian involvement during the world wars,” he said. “I think they should know something about the cost of what the military does.”

Timothy Eppes ’22 said he had taken photos of the garden to help detail the changes in growth along the way. “Looking back to the first photo, it was empty. And now it’s full,” he said. “We’re giving food to people who need it. This is a way to help give back.”

Ashley Rebehn ’22, who has volunteered with FACES through another class, agreed that it’s nice to know that’s where the food they are harvesting is headed.

Although the students in Lund’s class were most directly involved with planting and harvesting the garden, the project was a community effort. Members of Longwood’s ROTC program helped to move dirt into six raised garden beds. Lund worked with facilities management staff to have the beds made, and the soil was amended with compost from the university’s biomass facility.

Aside from the three types of lettuces and leafy greens, the victory garden produced other cole crops, including turnips, beets, broccoli and daikon radishes.

Lund plans to continue the garden in the spring with another section of English 215.