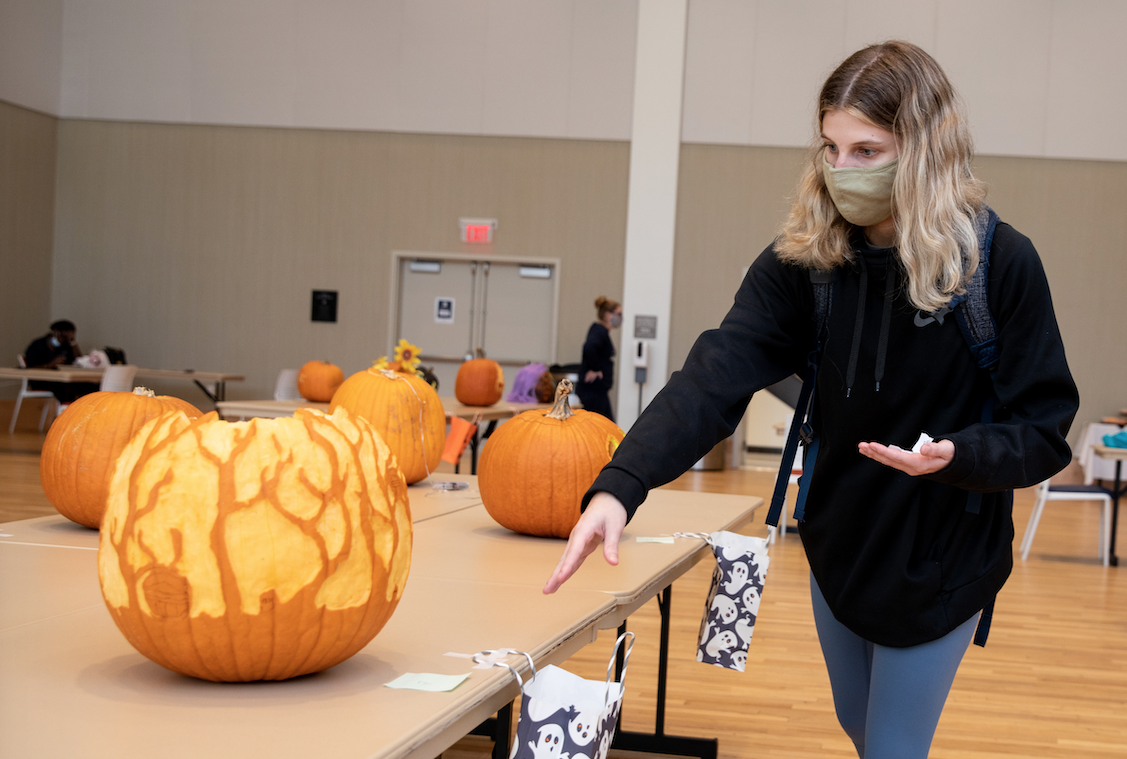 Pumpkin carving has come a long way in the last few decades, and nowhere was that more apparent than in the pumpkin-carving contest held Thursday.

There was hardly a triangle-shaped eye or nose to be found among the entries—but there were a lavender wig, handmade paper sunflowers and some incredibly intricate designs. Contestants ranged from first-time carvers to practiced artisans with years of jack-o’-lantern experience, and each of them had a story to tell.

When Kira Pierce ’22 dropped off her entry, it was immediately apparent that she took the contest very seriously—just as she does the annual Halloween pumpkin-carving competition between her and her dad, Longwood alum Gary Pierce ’91. Kira, a math major, spent eight hours carving intricate replicas of the Rotunda façade and the Colonnades—two of her favorite campus spots—onto her entry. Her previous pumpkin work includes detailed portraits of Jesus and of the University of Tennessee’s bluetick coonhound mascot Smokey. Why Smokey? Because Kira hopes to do her graduate work in engineering at UT.

Davice Jones ’23, a biology major, proved that pumpkin-carving inspiration can come from the unlikeliest of places. A Student Government Association (SGA) senator, she met with Dining Director Mitch Rodhe Tuesday to give him feedback she’d gathered about the food at Longwood. “He made me laugh,” she said, adding she decided then and there to create her pumpkin in his honor. Lit from within by twinkly lights, her “Mitch” pumpkin is gobbling a “cheeseburger” (represented by a smaller pumpkin) from FarmGrill, one of the restaurants in  the Upchurch University Center’s food court.

Also Thursday, the pouring rain stopped and the sun came out just in time for students to trick or treat across campus during the afternoon. Costumes were encouraged for those making the rounds of more than 20 offices that had signed up to welcome students for Halloween.

I think it’s nice that you don’t have to be a kid to celebrate Halloween at Longwood—just a little bit of a kid at heart. 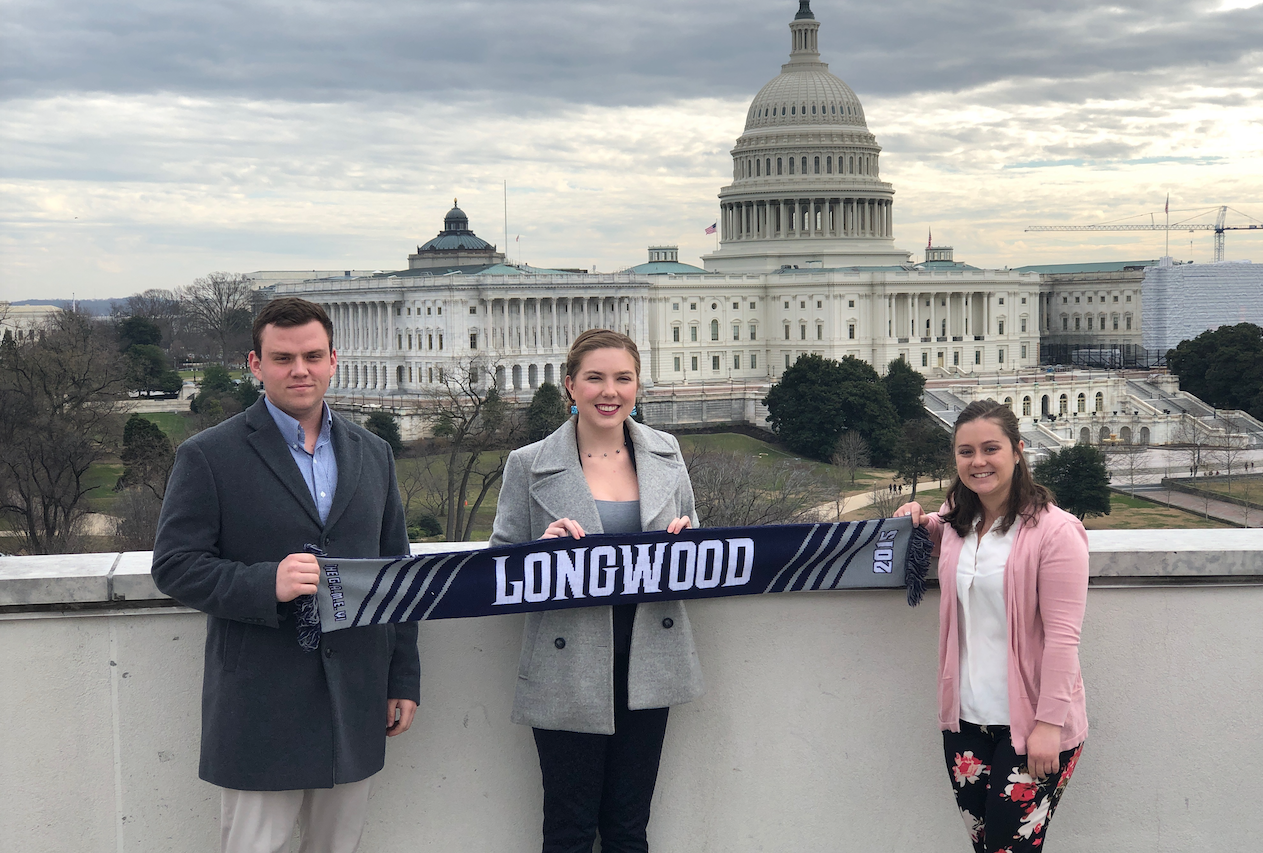 One of the great things about being a student at Longwood—and then being a Longwood graduate—is the strong connection our alums feel with these young people and the support they provide to them.

One example of this is the Work Shadow Program run by our Office of Alumni and Career Services.

The program gives current students the opportunity to spend a day with an alum working in a career field in which they have an interest. So far, more 55 alums, many of them from high-profile businesses and organizations, have volunteered to host a student for shadowing this year.

The deadline to sign up for this year’s winter break program is the end of October. If you think your student might be interested, now is the time for them to apply here: http://www.longwood.edu/career/work-shadow-program/ . The program will be held virtually this year due to the pandemic.

“Alumni really enjoy connecting with students and making a difference in their professional futures,” said Teresa Dodson, assistant director of employer engagement and internship services. “The goal is to give our students a taste of what the professional environment is like as well as to provide networking opportunities for our future alumni.

“We will do our best to find an alum in the student’s area of interest,” she added.

Below are some of the alums who have signed up to participate this year. Spending a day with professionals in these types of influential positions could be a life-changing experience for your student.

Head of technology in corporate and commercial banking
Ernst & Young 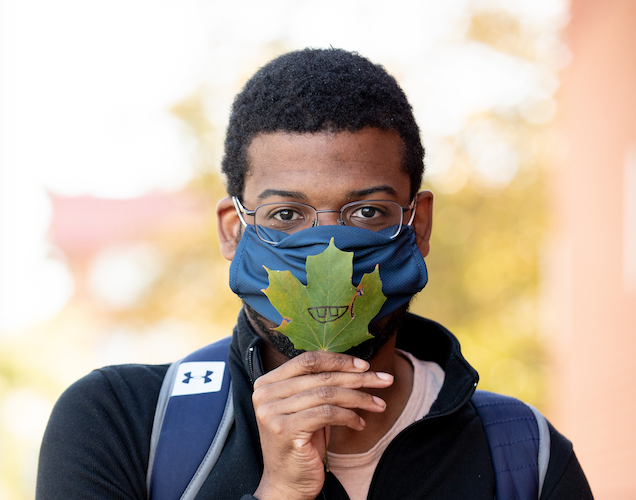 There are many things I love about our Longwood students: They’re friendly, kind, thoughtful, hard-working, unpretentious. Many of them also are really good sports, as the story I’m about to tell you will show.

Recently, 8-year-old Regan Vogel, the daughter of Longwood photographer Courtney Vogel, was on campus. She’d accompanied her mom to an assignment and kept herself busy collecting colorful leaves.

All was not exactly well, though. Regan noticed the smiles of students she encountered were hidden by their dutifully worn masks. Couldn’t they do something about that? Regan mused.

In a moment of collective creativity, the group drew smiles on the leaves and the students placed them in front of their masks for a photo op. 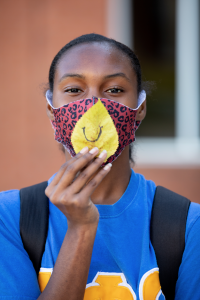 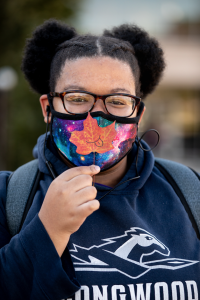 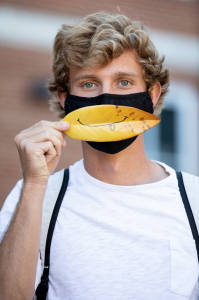 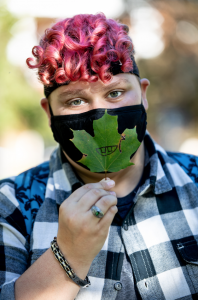 Regan was happy, and we hope these photos make you feel that way, too. Humans are great at a lot of things, but one thing we find challenging is making a significant lifestyle change over the long haul.

We gain back that 10 or 20 pounds we fought so hard to lose. We pledge to be tidier, but we only do it for a while. We’re all in for recycling, but it’s time-consuming and we don’t keep it up.

That’s the reason I am so impressed that—more than halfway through the on-campus portion of this semester—most students are still conscientiously wearing face coverings on campus, even outside.

At one student event I attended, where every student was wearing a face covering, one young woman told me that a culture of mask wearing has developed on campus. She added that students who don’t cover their faces quickly find out from their fellow Lancers that it’s not acceptable behavior.

Please encourage your student to continue to follow the guidelines for wearing a face covering, observing social distancing and washing their hands. Their vigilance is key to remaining on campus until Thanksgiving—but, more importantly, to staying healthy.

Also, even though the weather is cooling a bit, we’re continuing to encourage students to spend time outdoors by creating spaces conducive to socializing (with appropriate distancing, of course). This includes 100 Adirondack chairs and four fire pits spread throughout campus.

The chairs and the fire pits seem to be a hit. Here’s part of a thank-you note one student sent to a staff member about the new amenities:

“I just wanted to say thank you so much for transforming the outdoor space into an easily accessible and welcoming atmosphere to get students outside. I really have thoroughly enjoyed sitting in the Adirondack chairs or picnic tables on Stubbs and look forward to testing out the new fire pits!” 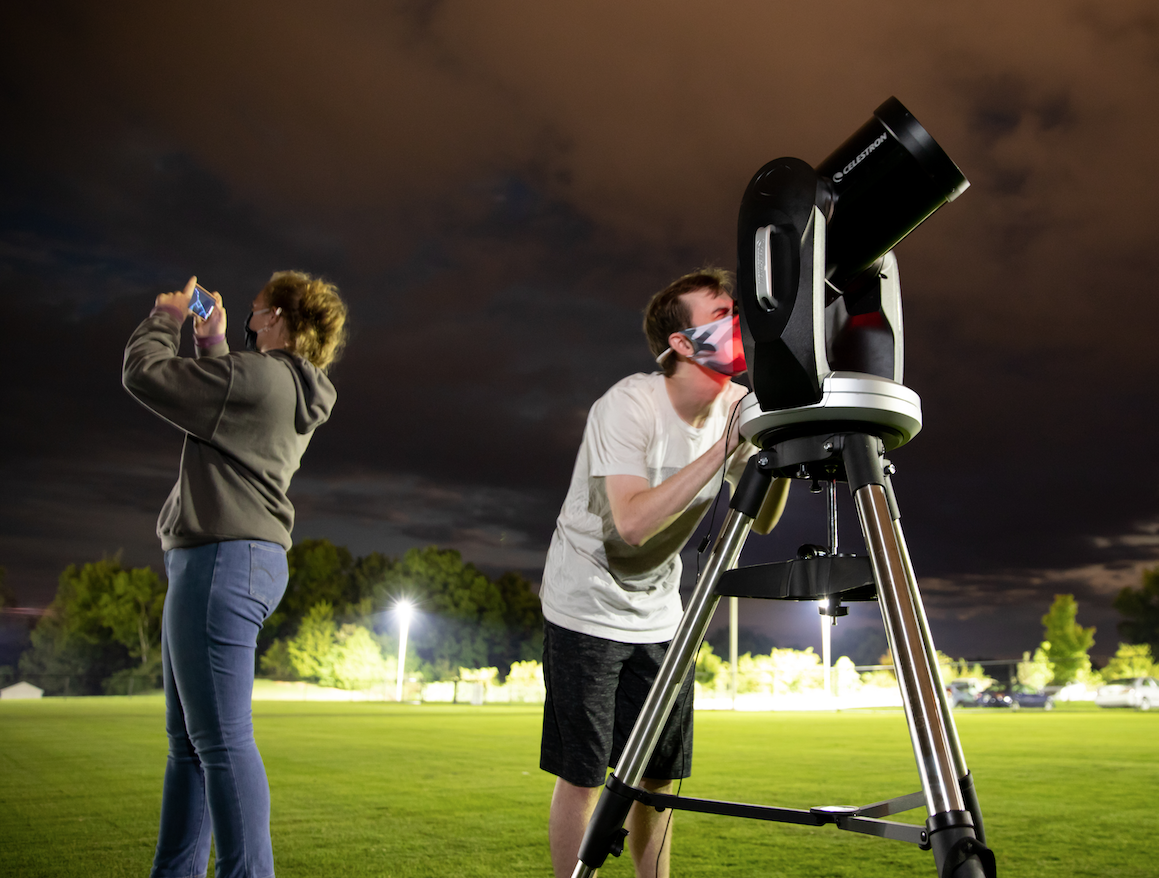 The clouds moving across the sky at times decreased visibility but they did nothing to dampen the enthusiasm of the Longwood students who turned out recently for an evening of stargazing.

“Even with the clouds rolling in, we were still able to view the moon, Mars, Saturn and its rings, as well as Jupiter and its four inner moons: Io, Europa, Ganymede and Callisto,” said physics major Austin Hedges ’21, president of the Society of Physics Students (SPS), which co-sponsored the event with the Outdoor Club.

Giving participants that close-up view of “outer space” was an 8-inch telescope equipped with a GPS system programmed with the locations of thousands of celestial objects.

Leah Eick ’23, a nursing major and Outdoor Club media and equipment chair, got an eyeful thanks to the sophisticated equipment. “I’m fascinated by the planets. Just being able to look at something so far away and see the beauty of it is amazing,” she said.

Dr. Kenneth Pestka II, a physics professor and the SPS faculty advisor, said students received training and practiced using the telescope before taking it to the event. “Once the operator has correctly aligned the telescope, it can accurately track objects, and it can also find celestial objects for the user,” he said.

The Society of Physics Students and the Outdoor Club are just two of Longwood’s more than 175 student organizations. With adaptations for Covid-19 guidelines in place, these organizations are providing students with opportunities to get together to do things they love and make new friends.

Outdoor Club president Crystal Rosenbaum ’21, a nursing major, said her group has been “jam-packed with activities” this fall, including weekly bike rides, outdoor yoga classes and a sunset hike on the High Bridge Trail attended by 25 students.

The stargazing event is another facet of the club’s mission to “get students interested in the outdoors and to continue that interest past their college years,” she said.

The event put Ashley Roberts ’21, a sociology major and Outdoor Club member, in mind of camping trips with her dad where they would lie on their backs and look up at the stars.

Daniel Alvarez ’23, an English education major and treasurer of the Outdoor Club, is a nature lover who spends a lot of time at his home in rural Northern Virginia “down at the creek fishing” and exploring the woods with his dog. He had a telescope when he was a kid, but it was nothing like the one the physics students set up for the stargazing activity.

“It’s nice to be able to look through a telescope that lets you see so much detail,” he said.

That’s just the reaction Hedges was hoping for.

“I think the participants really enjoyed being able to get great views of these objects,” he said. “Especially with Mars, Saturn and Jupiter because with the naked eye they are just small dots in the sky. With the telescope, we could clearly see the red color of Mars, the beautiful rings of Saturn and the bands across Jupiter’s atmosphere.”

The event was such a hit that the two clubs are planning to do it again in the near future—hopefully when the weather will be more cooperative.

“Outer space is so vastly unknown to society as a whole,” said Rianne Woudsma ’23, a physics major and vice president of the Society of Physics Students. “I’m hoping we can get more people interested in what’s out there with these events.”

Just about four years ago, Longwood was in the international spotlight as the host of the U.S. Vice Presidential Debate.

Hosting the debate was an unparalleled experience for the entire Longwood community—especially students, who signed up in droves to volunteer for the event, putting them at the epicenter of an experience they’ll never forget.

We thought today would be a good time to look back on that experience and everything it meant for Longwood, including:
—Increased awareness of our university with more than 40 million viewers and the equivalent of more than $80 million in media exposure
—Career boosts for students who made important connections with those organizing and covering the debate
—Opportunities in Longwood classrooms to put an academic focus on the meaning of citizenship and democracy

I hope you’ll enjoy the videos below, which will give you a glimpse into the impact this momentous occasion had on our campus and our community.