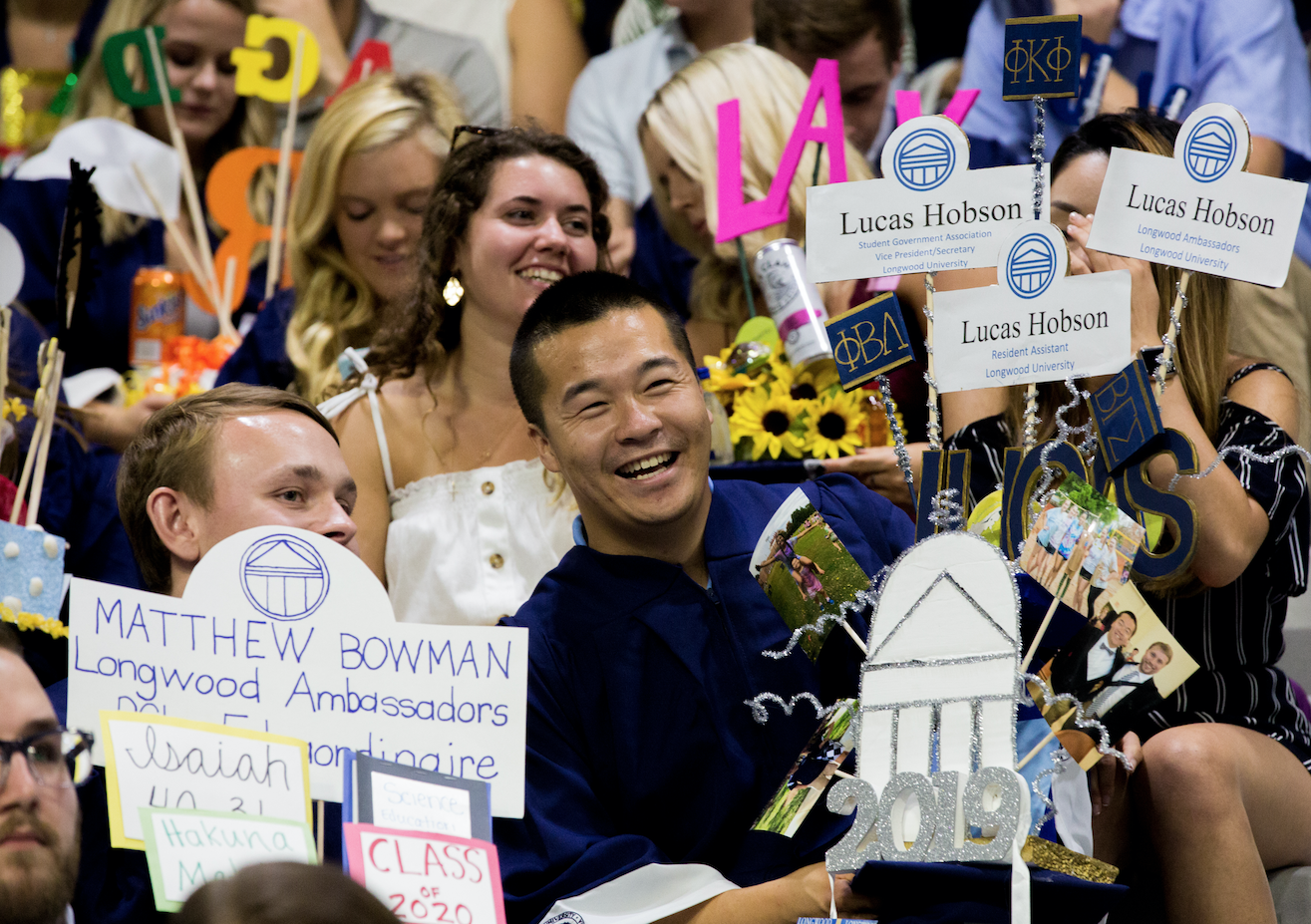 The beginning of senior year is cause for celebration and reflection. At Longwood, a longtime tradition known as Convocation marks this rite of passage. There’s a lot that’s serious about Convocation, but it ends with a lot of laughter and silliness.

First the serious side. The academic regalia the students and faculty wear as they process into Willett Hall indicates that this is an auspicious occasion.

“Today we honor two groups,” President W. Taylor Reveley IV said at this year’s ceremony earlier this month. “First our seniors … the great class of 2020. Second we honor those who have guided our seniors from their arrival at Longwood to this point: Our remarkable faculty, whose commitment to their students is, I believe, our institution’s most valuable resource.”

Softball Coach Kathy Riley, who has inspired hundreds of student-athletes to greatness during her 22 years at Longwood, aimed her motivational prowess at the seniors and other students in attendance. Her message was one of self-actualization, self-confidence and a reminder of the responsibility every member of the Longwood community has to better the world around them.

She pushed Longwood’s students to pursue social justice and equality. And she encouraged them to fight. “Fight for your self-worth and everything that is important.”

Then it was time for the caps—those towering, nostalgic, silly, intensely personal caps.

Custom-made by someone close to the senior—a friend or sometimes a family member—and placed on the senior’s head by that person, the caps are a visual representation of who the senior is, where they’ve been and where they’re going. They’re history, hopes and dreams.

You can feel the love in every fluttering strand of photographs, every tiara, every bow tie, every set of cardboard Greek letters and every crown of No. 2 pencils (think future teacher). Bottom line: The capping ceremony is a massive amount of fun. 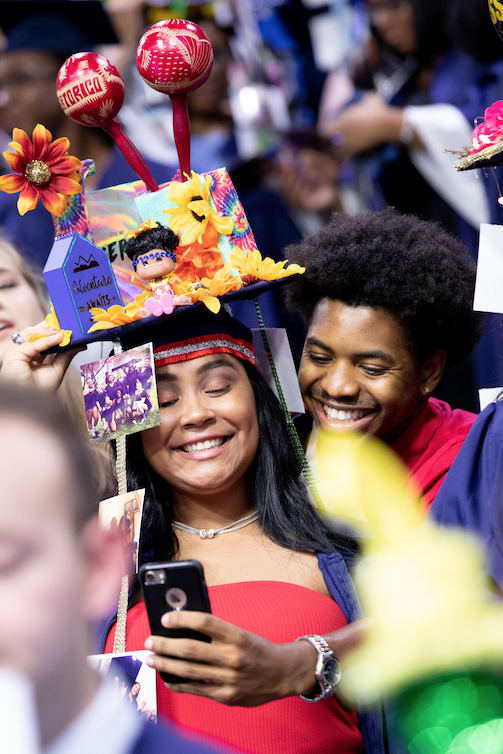 Family are welcome to attend Convocation, so if you’re interested and your student will be a senior next year, try to wrangle an invitation. I’ve worked at several universities, and I’ve never seen anything like it. 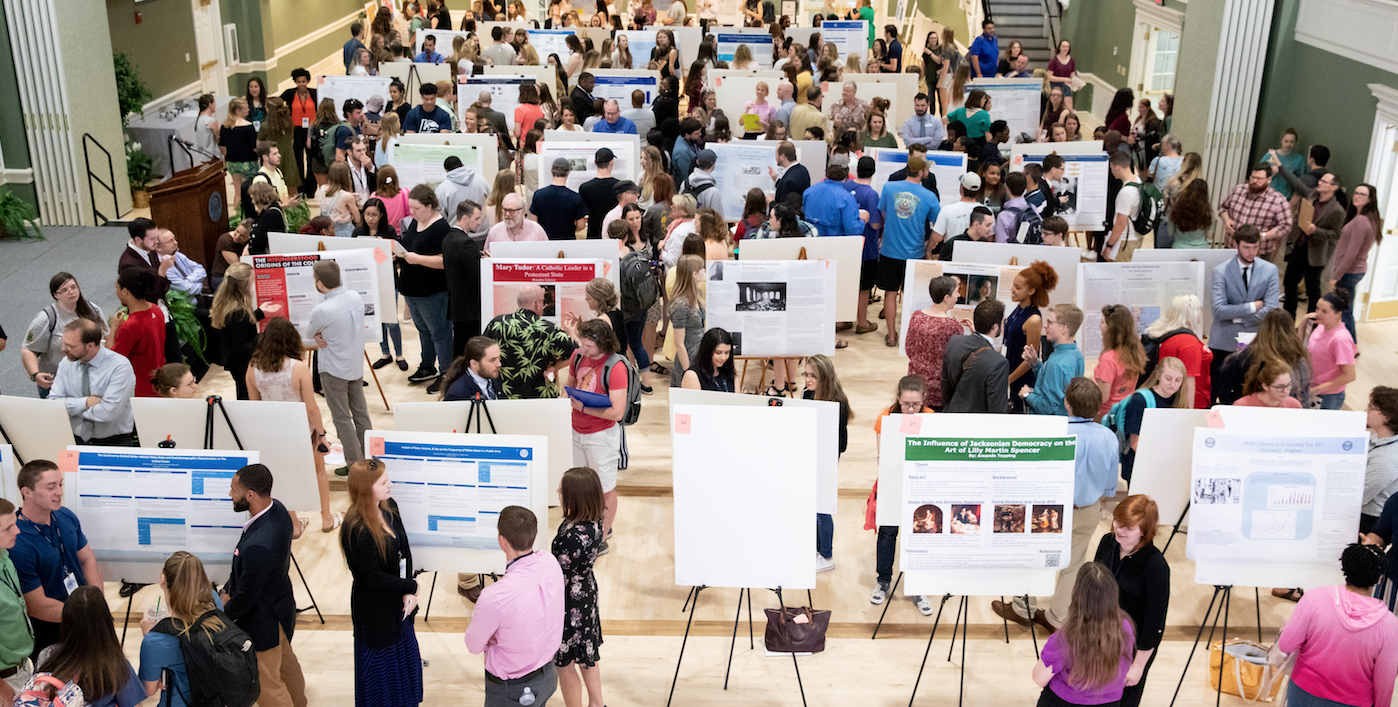 “Studies show that undergraduate research is one of the most meaningful and high-impact experiences a student can have, profoundly shaping their learning, their work habits and sometimes even their lives.”

The person who said this knows what she’s talking about. Dr. Larissa Smith is Longwood’s provost and vice president for academic affairs as well as a longtime history professor.

But Longwood does more than just talk about the transformative power of undergraduate research—we put some serious cash behind it. And your student could be on the receiving end of those funds—and the life-changing experiences they support.

There are two opportunities your student can look into:
—PRISM, Longwood’s summer research program
—Fall and spring disbursement of research funds based on proposals submitted by students

For this fall, funding will be distributed in two rounds. The deadline to apply for the first round of funding is 5 p.m. Friday, Oct. 4. Applications for the second round of funding are due at 5 p.m. Friday, Nov. 1. Projects from all disciplines are eligible for funding consideration—everything from theatre and art to business and the sciences. Students can work individually, or they can collaborate in groups of two or three.

Awards for successful proposals can be as much as $500 per student.

That “pot of gold” lies at the end of an application process that includes detailing a well-thought-out project and getting a recommendation from a faculty member. It also includes submitting a project budget of eligible expenses (this is a learning experience in and of itself) that can include things such as lab equipment, art supplies, software and travel.

So, if your student is interested, tell them to get going on that application. It’s available at http://www.longwood.edu/office-of-student-research/news/articles/student-research-and-travel-funding-fall-2019.php

Also coming up in early November (exact date TBA) is the deadline to submit an application for Longwood’s eight-week summer research program, PRISM, which stands for Perspectives on Research In Science and Mathematics. With a focus on intense research and tangible results, PRISM puts students at the center of the research process, working alongside a faculty member.

Students who are chosen to participate receive a $3,500 stipend plus free room and board. Funding is also provided for equipment, supplies and travel. Your student can keep an eye out for the summer 2020 application on the Office of Student Research website: http://www.longwood.edu/studentresearch/

So many Longwood students have said that doing research was a defining experience that set them on a life/career path they wouldn’t otherwise have known existed. Maybe your student would be just as profoundly affected. 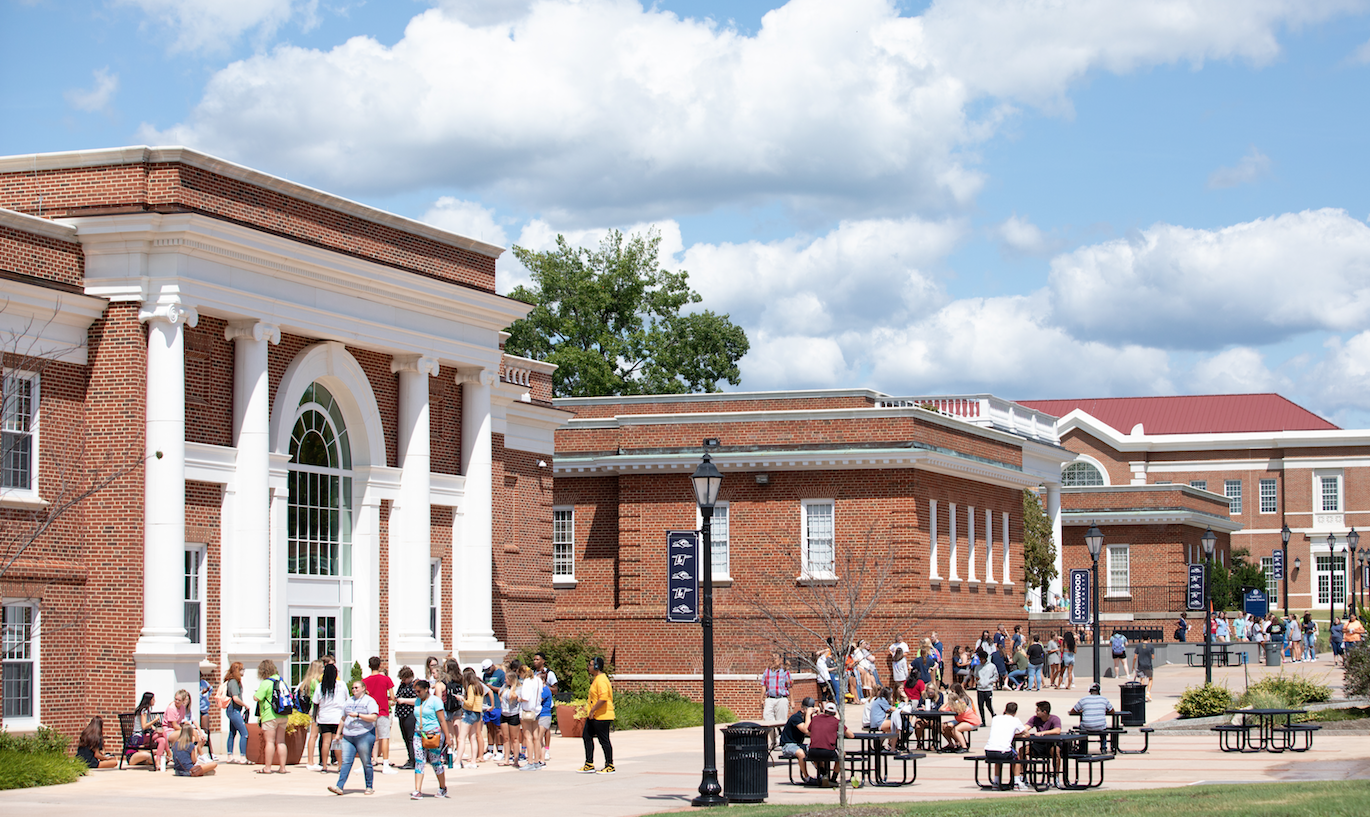 So you’re hanging out with some friends whose children also are in college, and the conversation winds its way around to a comparison of the universities your sons and daughters are attending.

Here are some new talking points about Longwood you can have ready to drop into that conversation, just out from U.S. News & World Report and RNCareers.org.

In the annual U.S. News & World Report rankings:
*Longwood ranks No. 6 among the Best Public Universities, South Region, moving up two spots from last year. This continues a steady climb from Longwood’s No. 12 spot in 2013.
*In the South, Longwood is recognized as the “Best Value” among Virginia public universities.
*Longwood ranks No. 13 in Best Universities, South Region (a list including all public and private institutions)—up from No. 25 last year.
*Longwood is included in the ranking of Best Undergraduate Teaching, South Region.

In the national ranking of nursing programs by RNCareers.org:
*Longwood ranks No. 1 in Virginia and among the best in the country. This achievement is thanks to Longwood’s 100 percent licensure pass rate for the last three years—an accomplishment few other schools in the country can claim.

“Rankings can fluctuate year to year, and they aren’t the focus of our goals at Longwood. But when an institution rises over time, it’s because of a rise in underlying numbers that do matter. Those include survey results on how others view our academic reputation, our success in helping students graduate and continuing to add full-time faculty to keep classes small at a time when most institutions are doing the opposite. All those things count in the formula but they aren’t just numbers—they shape the college experiences and lives of our students.

“I’m especially proud to see the excellent value of a Longwood education recognized,” Reveley said. “We know that our work in recent years to have among the very lowest annual tuition increases in the state—including a freeze this year—makes a real difference to students and families.”

Among the factors that account for Longwood’s sustained rise in the rankings: a graduation rate that exceeds expectations and a strong freshman retention rate—the number of students who return for their sophomore year. Both were points of emphasis in Longwood’s 2015 Strategic Plan.

Also, Longwood continues to invest heavily in full-time, tenure-track faculty— offering students smaller classes taught by professors who are making their career at the institution. Since 2012, Longwood’s ranks of tenured and tenure-track faculty have increased by 43 faculty members, amounting to growth of 25 percent.

That comes as universities across the country have scaled back full-time faculty hiring, relying more on adjuncts, graduate assistants and part-time staff to teach classes. Longwood has capped Civitae core curriculum classes—the general education requirements that make up the foundations of citizen leadership—at 25 students, a far cry from the 100+-seat lecture halls that are common on college campuses.

In its rise in the rankings, Longwood has moved ahead of several well-respected institutions, including the Converse College and University of Mary Washington. On the list of regional public universities in the South, the top three Virginia schools included are James Madison, Christopher Newport and Longwood.

The Best Value ranking system compares overall ranking with total cost, factoring in the amount of need-based aid and the average discount given. Longwood is the only public university ranked in that category this year.

So you can be proud of the university your child selected (with help from you, of course), and you can feel confident that the investment you’re making in your child’s education is a good value. 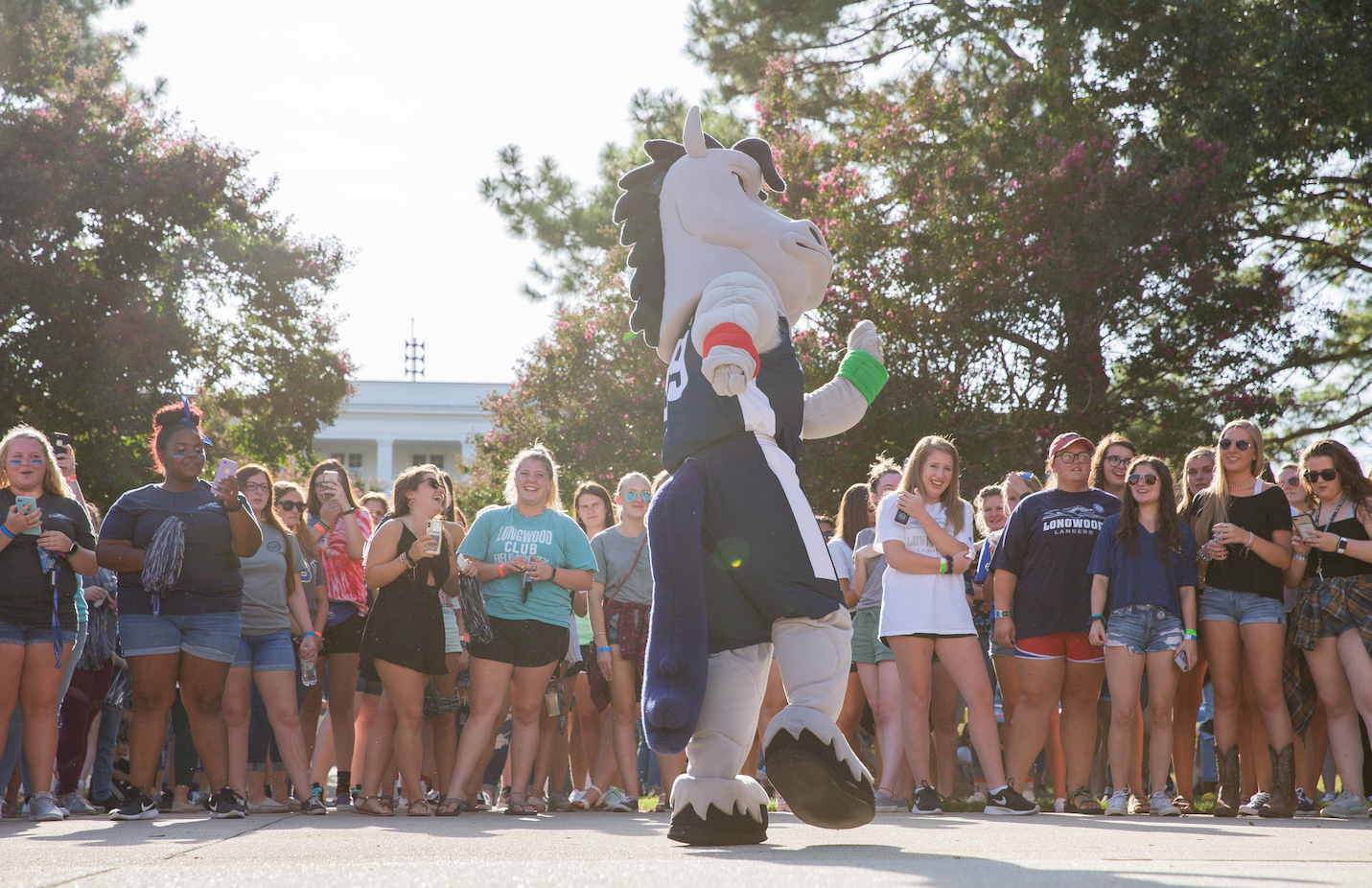 They’re not Longwood’s oldest traditions but they’re definitely some of the most fun.

The fifth annual First Friday Back and The G.A.M.E. (Greatest Athletics March Ever), which celebrated its 10th anniversary this year, brought out students in droves last Friday, Aug. 30. About 1,000 Lancers turned out, and Elwood, Longwood’s mascot, got in on the action, too, busting a move in front of an adoring crowd.

The events provided a welcome time to relax and take a break after the first week of classes. 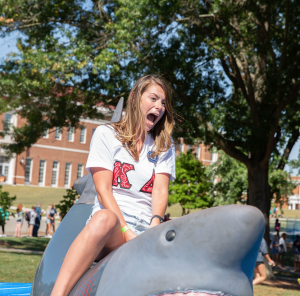 Students found out even land sharks are terrifying. 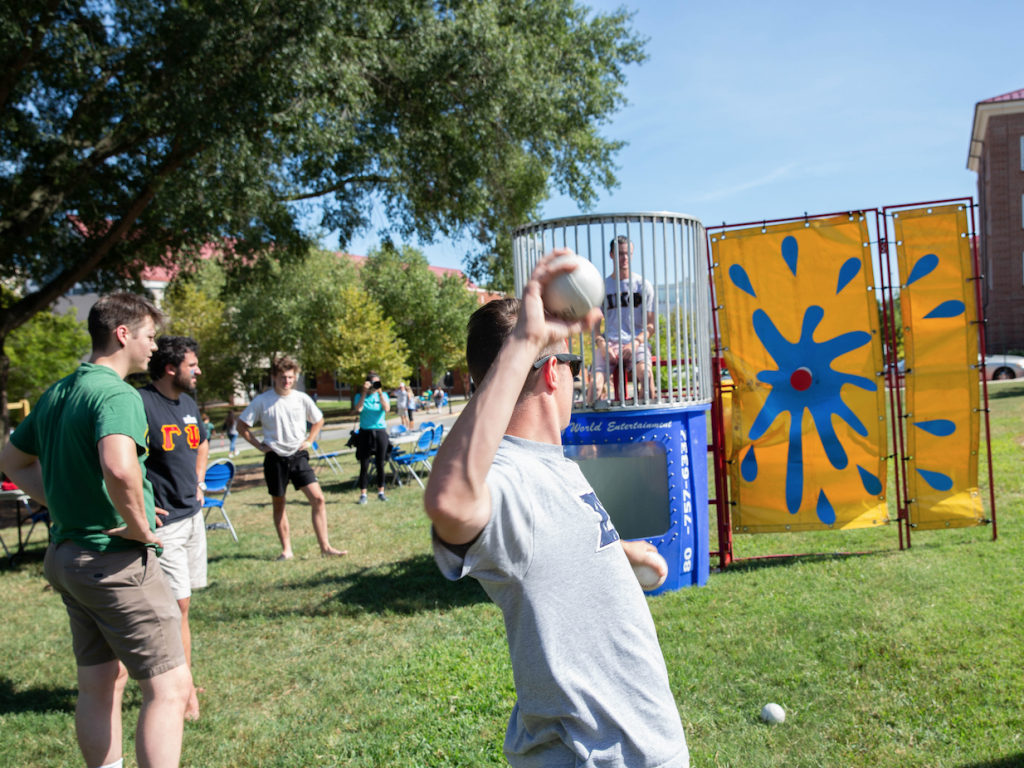 They took their best shot at putting their fellow students under water. 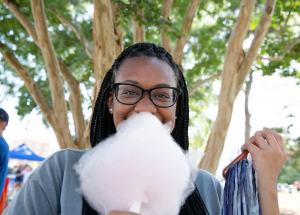 And they satisfied their carnival cravings with cotton candy, snow cones and popcorn. 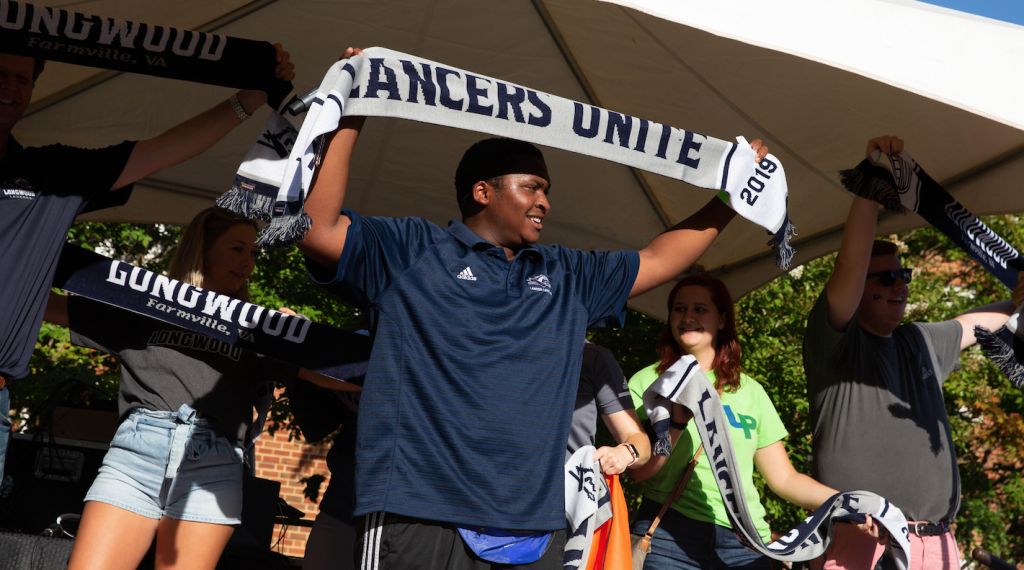 A highlight of the afternoon was the big reveal of the design of this year’s Longwood Scarf, which is celebrating its 10th anniversary as a must-have Longwood accessory. About 1,400 scarves were handed out.

Then it was time for the milelong march to the Athletics Complex, where students received their scarves, enjoyed a picnic and rooted for the women’s soccer team in a match vs. UNC Charlotte. 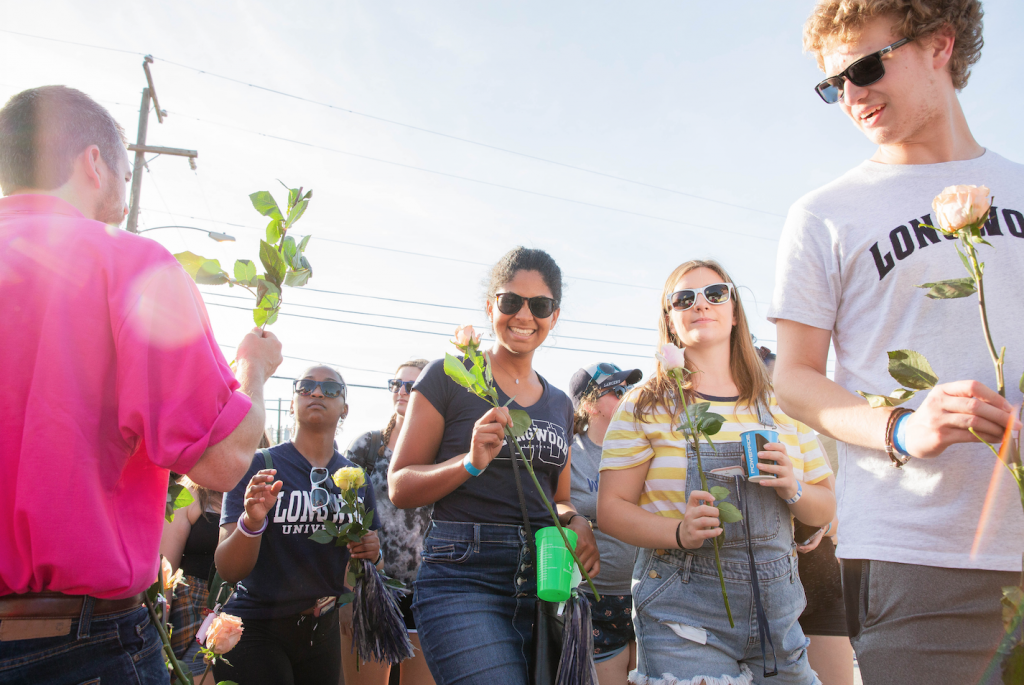 Each year Rochette’s Florist donates roses for students to pass out to community members along the route of the march—or to keep themselves.

Some students make it a point to collect a set of scarves, one from each year they attend Longwood.

Students enthusiastically supported the efforts of the women’s soccer team, one of Longwood’s more successful sports. The team finished in the top three of the Big South Conference last year.

A big shout-out to the organizers and sponsors of these First Friday Back and The G.A.M.E.: University Center and Student Activities, Fraternity and Sorority Life, Athletics, Lancer Productions, SGA, Marketing and the Office of the President.

FINALLY DON’T FORGET ABOUT FAMILY WEEKEND, which is coming up Sept. 20-22. Registration at the early bird price goes through tomorrow, Friday, Sept. 6, but you can still register online after that date or on campus at the event. Family Weekend is a great opportunity to share the Longwood experience with your student.